For many crimes there is a criminal statute of limitations that limits how long prosecutors have to file criminal charges after the crime has happened. These limits vary depending on the type of crime that was committed. When it comes to misdemeanor charges in Colorado, the statute of limitations can be anywhere from 18 months to five years. However, with many felony charges such as murder, treason, or kidnapping there is no statutory limit on filing charges. In this post, we are going to go into greater detail regarding statutes of limitations and whether or not you can be charged for a crime that you committed years ago. Continue reading below to learn more.

Purpose of a Time Limit

The goal of criminal statutes of limitations is to ensure that the accused are given a fair criminal trial that is based off the best possible evidence. It is well known that evidence of a crime, whether it be physical (like DNA and fingerprint) and testimonial (like victim statements and eyewitness accounts) tend to become less reliable over time. In fact, much evidence becomes unusable over time or is lost completely.  However, as we stated above, particular statutes of limitation vary in length because the justice system is very adamant about prosecuting the most serious offenses.

Additionally, it is important that you understand that the time to prosecute on most statutes will only exist while the alleged perpetrator remains visible and is in the state where the crime occurred. If, on the other hand, the suspect is out of state or hiding, the amount of time that is allowed to prosecute the person will be paused and will begin counting once again when and if the criminal reemerges. This prevents criminals from committing serious crimes and simply leaving the state or remaining hidden until they can not longer be charged for what they have done.

What can you press charges against someone for? Sometimes it seems like the list is endless. If your lawsuit would fall under one of the following examples, you are also subject to statute of limitations. These are the most common statutes in civil law:

What is Colorado’s Statute of Limitations for Crimes? 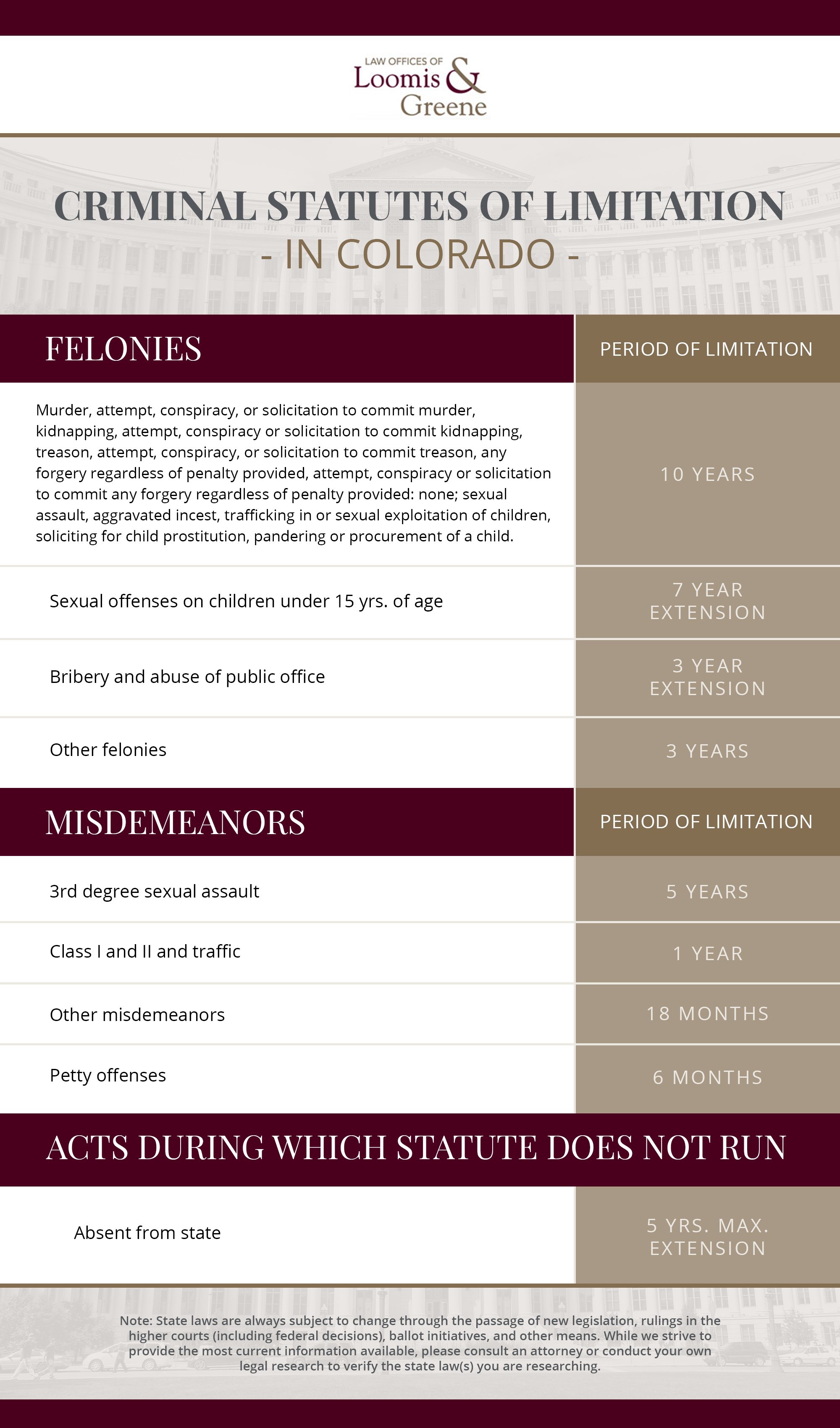 You Need a Colorado Criminal Attorney

If you are interested in filing charges against someone after waiting a period of time to pursue this legal avenue, we would suggest that you speak with a lawyer first and foremost. An experienced attorney can give you a better idea of whether or not your case is viable and whether the statutes of limitations is up for the crime you are wanting to press charges for. Contact the Law Offices of Loomis & Greene today if you live in Loveland and need legal assistance. We would be happy to help you with your case.